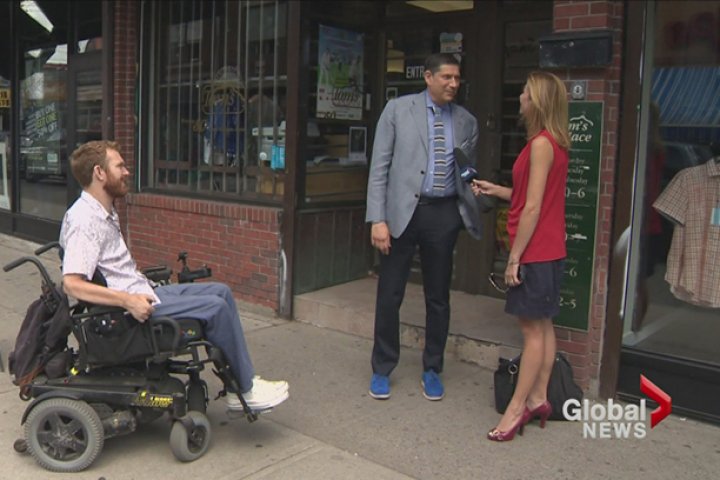 TORONTO — A well-known Toronto retailer has followed through on his promise to make his store accessible. Now the owner of Tom’s Place, in Kensington Market, is calling on other businesses to do the same.

At the start of the Parapan Am Games in August, Global News toured Kensington Market with the founder of the StopGap Foundation, Luke Anderson.

StopGap has been doing what it can to make it easier to overcome physical barriers, building custom-made wooden ramps that can be deployed when needed, so people who cannot navigate stairs can still get inside.

It was clear that several businesses were inaccessible due to a single step at the door.

One of the businesses Anderson approached was clothing store Tom’s Place.

Initially, staff told him he could try another door, which was also inaccessible, then said they could bring clothes out to him.

When the owner, Tom Mihalik, realized Anderson was shut out, he committed to ordering a StopGap ramp.

Anderson’s foundation builds the custom wooden ramps for businesses so people who require wheelchairs can get inside.

When the ramp was delivered to Tom’s Place, it was the first time Anderson could go inside the Kensington Market institution.

“I admit it, I feel bad about it, that it too me so long to make the change,” said Mihalik.

Anderson said ensuring access is not only good for business, it’s the right thing to do.

“Everyone has a human right to equal access and these ramps help provide that,” said Anderson.

A message Mihalik promised to promote to other business owners.

StopGap is a movement gaining momentum. Work is being finished on 71 new custom ramps ordered by Toronto businesses, which will be delivered next week.

Anderson said while that’s a huge success, the initiative is about more than the ramps themselves.

“We are creating a conversation about how a single step can be a really big issue.”