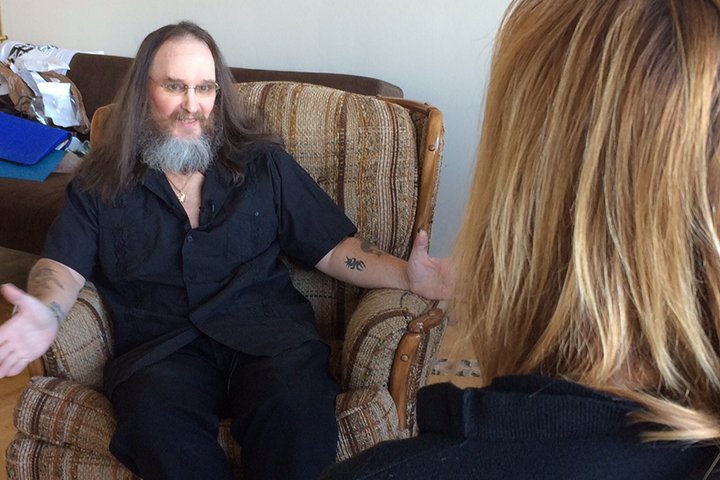 TORONTO — Actor Hal Myshrall has found himself on the outside of the film industry looking in. He literally can’t get inside Toronto casting houses for auditions due to a lack of accessibility.

He said he was supposed to have an audition at Jigsaw Casting, but couldn’t get up the stairs.

About five years ago he started having health problems, now, due to complications from diabetes, he can barely walk and gets around with the use of an electric scooter.

He said he followed up with Jigsaw Casting asking why their studios are not accessible.

“The person I had talked to turned around and said, ‘We are handicapped accessible, we have an elevator around the back of the building,’” said Myshrall.

Global News went to the building. Down a muddy alley, there is a large yellow door, which presumably would reveal a freight elevator — nearly a metre off the ground.

Staff at Jigsaw Casting said they couldn’t answer questions, adding that the owner was not in. The owner did not respond to requests for comment from Global News.

But the issue is much larger than just one location.

The union representing actors recently did an inventory of Toronto casting houses, and found almost none were accessible.

“It’s 2015 for goodness sake. People who have accessibility issues should be given proper respect and allowed to get in and audition for all roles,” said David Sparrow, ACTRA Toronto’s president.

ACTRA even produced a video highlighting the problem. In the video, a man throws a rope down from a second storey window to help a woman in a wheelchair get to her audition.

Tongue in cheek, it gets the point across.

At Casting Central, where there are many flights of stairs, they said they’re going to do better.

“The current owner of this business took over about three years ago so they inherited this space,” said David Guthrie, manager at Casting Central.

The company is moving next year and accessibility will be a priority.

“That is 100 per cent our plan, so yes it will be. We have every intention of doing so,” said Guthrie.

Myshrall has played many supporting roles, but said he is taking on a lead role for improving accessibility.

Having made a living acting, decade after decade, he has no intention of stopping now.